In our search for an appropriate logo for Project MEAC, we felt that we needed to find an image that represents the origins of visual art in Maine, which are the Petroglyphs. In our search we worked with several people that are experts in the archeological field who were extremely helpful in locating and explaining the image that we chose. We want to thank:

Below is an except from Mark Heddenʼs writing of the explanation of the image:

“It is understood that the drawing is a part and a part only of a larger complex that includes a female (and possibly pregnant) moose with the two moose arranged on either side of a central human figure. The entire complex may represent iconic expression identified in North Eastern North American oral traditions as the “Elder Brother” who controls the moose population, a spirit hunters wanted to stay on the good side of for success. The bull moose shown in the sketch has significant details which are not clear in the reproduction (an outlined (not solidly pecked out body, for example). Each detail has meaning to the visionary Medo’win who, we think, made the glyphs between 1400-1600 AD. I consider the Machias Bay petroglyphs, a highly significant source on Passamaquoddy history and religion over the past 3000 years.” 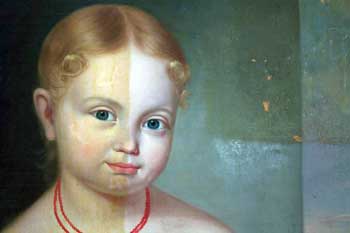 Our studio staff trained and worked in several art conservation studios in New York City. They also have degrees and studied fine art, art history and conservation in Italy, New York and Latvia. We are affiliated with national and international associations in the conservation field.

Both of our founding directors, Domenico & Bonnie Mattozzi, are Professional Associates with the American Institute for Conservation of Historic and Artistic Works (AIC).